The History of Irish Tennis

The History of Irish Tennis

Celebrating the 120th Anniversary of the Golden Era of Irish Tennis this unique book is now available at a special discounted price of €60 while stocks last.

In 3 volumes, with over 1800 pages, this hard back A4, limited edition, contains 42 chapters and sub chapters, over 3000 photographs and illustrations and is probably the most comprehensive book ever written on any nations tennis history. 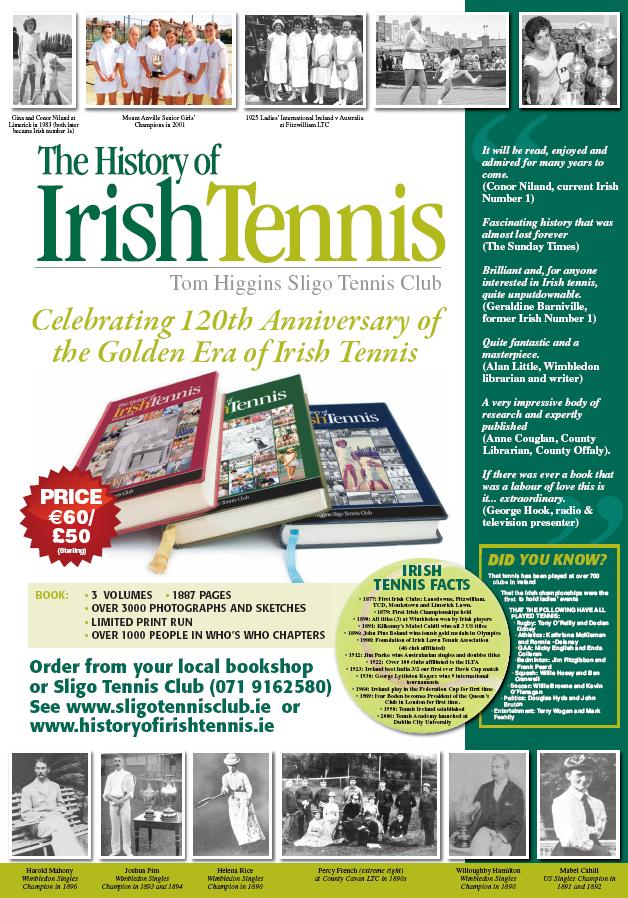 The summer of 1890 saw the beginnings of a great era in Irish tennis. The world of tennis was ruled by some of Ireland’s greatest, yet most forgotten, sportspeople. At that time the Irish Championships were considered to be more difficult to win than Wimbledon, such was the standard of the game on this island. While four of the five Irish titles in 1890 (held at Fitzwilliam Lawn Tennis Club) went to home players, it was at Wimbledon that we made our exceptional mark. Lena Rice from Tipperary won the ladies’ championship and Willoughby Hamilton the men’s championship. To top this, the men’s doubles title was won by Joshua Pim and Frank Stoker from Dublin. Stoker also played international rugby for Ireland and was a cousin of Bram Stoker, the author of Dracula. Wimbledon had no ladies’ doubles or mixed championships until 1913. Both Pim (1893 and 1894) and Harold Mahony (1896) also won the Wimbledon singles, the latter in a record of 57 games for a Wimbledon final.

The summer of 1890 saw Kilkenny’s Mabel Cahill reach the US championship All-Comer’s final. In addition to winning this title in both 1891 and 1892, Mabel won both doubles titles in these years. She is the only Irish player to have been elected to the International Tennis Hall of Fame.

In the years that followed there have been many successes of note. John Pius Boland won Ireland’s first gold medals in the Athens Olympics of 1896. In 1900 Mahony won all three gold medals for tennis at the Paris Olympics.He died tragically at 38 in a bicycle accident near his home in Killorglin, County Kerry. Jim Parke of Clones became Australasian (1912) and European singles champion (1914). Their detailed stories are among the many found in the book.

Ladies Singles All-Comers finalist: Mabel Cahill (IRL)
What they say about The History of Irish Tennis:

“Tom Higgins has produced an extraordinary book and Irish tennis is fortunate to have it. It will be read, enjoyed and admired for many years to come.”
Conor Niland, National Number 1.

“Brilliant and, for anyone interested in Irish tennis, quite unputdownable.”
Geraldine Barniville, former Federation Cup player.

“If there was ever a book that was a labour of love this is it…extraordinary.”
George Hook, broadcaster.

“(the) fascinating history that was almost lost forever.”
The Sunday Times

Where to buy the book