The International Tennis Federation approved an amendment to the Rules of Tennis for 10-and-under competition. The change, approved overwhelmingly by the ITF Annual General Meeting, is designed to make tennis easier and more fun for children and to ensure that competition is appropriate for those 10 and under.

The rule will go into effect in January 2012 and will mandate modified courts that are smaller in size than the 78-foot courts currently used for tournament play. It will also mandate low compression tennis balls that move slower through the air and bounce lower and are thus better suited to the size and abilities of younger children.

"This is a great step forward for tennis, and I thank the ITF AGM for their support of this important initiative," says ITF President Francesco Ricci Bitti. "Tennis 10s will improve the way we introduce tennis to young players."

"We applaud today’s decision and have supported the ITF throughout this process," says Des Allen, Chief Executive of Tennis Ireland. "We’re very excited about what this change means for the future of tennis."

Tennis 10s is a ten and Under Tennis initiative, which embraces the tools of the modified game format–with its smaller courts, slower-moving and lower-bouncing balls, smaller and lighter racquets and modified scoring systems–to make tennis more accessible for children 10 and under.

"Scaling tennis to the size of children will promote greater participation and ensure that young children will be able to play tennis much more quickly," says Roger Geraghty, Director of Development & National Children’s Officer, Tennis Ireland. "That is critical to the long-term growth of our sport and ultimately as well as helping us to increase participation will develop new generations of quality players who can compete on the world stage."

10 and Under Tennis is designed around the same concepts as mini soccer, rugby & basketball and other youth sports such as athletics, all of which use equipment and field/court sizes scaled to the size of young children. With the smaller courts, lower-bouncing balls, smaller racquets and modified scoring systems designed for those 10 and under, children are able to rally and play the game early on, developing a lifelong passion for the sport and creating a new generation of players and fans. 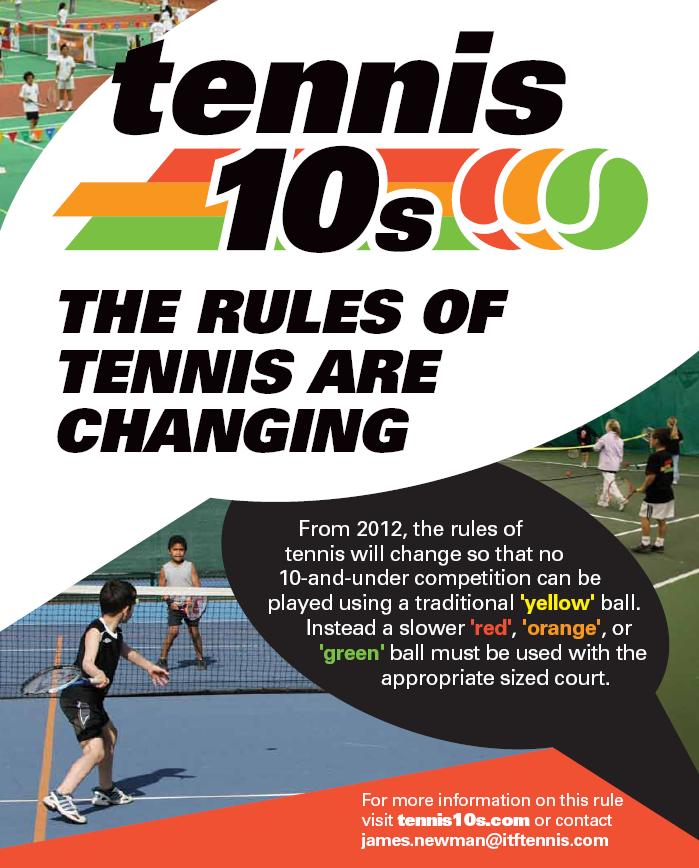