***Please Note: rankings will be published by close of business Wednesday of each week.***

Tennis Ireland is very pleased to announce the launch of our new TI Junior Tour.

The new structure whilst similar to the existing one offers a broad platform to support Junior Tennis and players at all levels.

The new structure will be greatly beneficial to junior tennis in Ireland as: 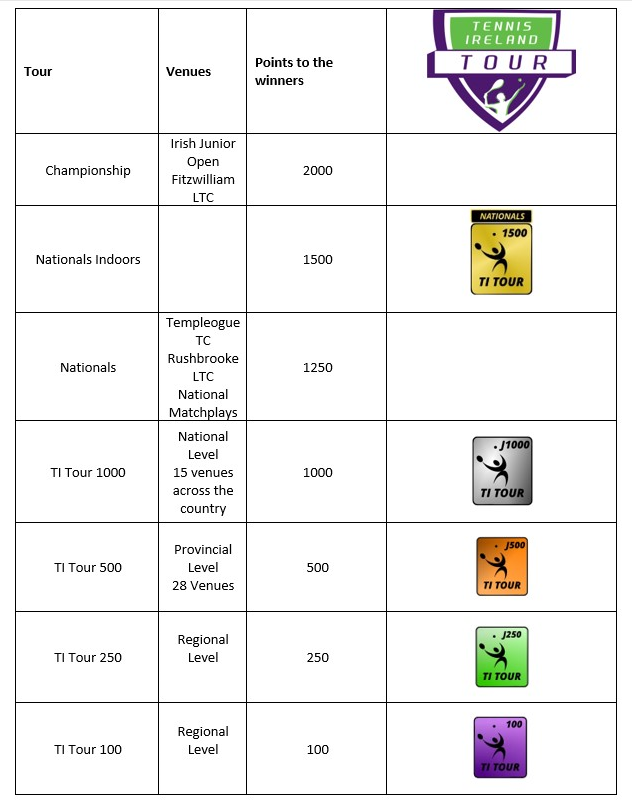 *Logos will change once new branding is complete

The new TI Junior Tour Ranking points structure will apply to all 2020 tournaments. Ranking points will be adjusted for the National Indoors and will be reflected in the rankings published Tuesday 28th January 2020 (ranking week 2020-5).

Ranking rules are not changing and will continue apply in the same manner (for details please refer to our ranking webpage):

The conversion factors applied to points obtained in ITF or Tennis Europe events will be changed:

Registration on the National Player Database

Ranking Categories will determine the quantity of points gained by the player:

All junior players entering Tennis Ireland sanctioned junior open tournaments are eligible for ranking points depending on the round they reach and the Category of the Tournament.

Reference the PDF document at the end of the page for ranking points tables.

Before the beginning of the season, all tournaments are categorised by the national competitions committee.

The Category allocated to each event guarantees that players entering the event will receive that Category’s ranking points.
Tournament categories can be viewed on the Tennis Ireland Junior Calendar.

Qualifying, Provincial and National Matchplay are considered as one item with points awarded only ONCE (highest points achieved within the series) at the end of each series.

Reference the PDF document at the end of the page for details of matchplay ranking points.

Doubles rankings were introduced at the start of the 2015/2016 season.

Doubles ranking points are assigned individually to each player.

The same factors being applied to singles rankings for Tennis Europe and ITF events will be applied to national doubles rankings.

Points received in International Tournaments are converted to Irish Ranking points using a given conversion rate that reflects the strength of the event.  Points will be awarded to players that didn’t reach the second round in a main draw if they won one or more matches in the Qualifying round.  Points given will reflect the Category of the International Tournament.  The onus will be on the player to submit the tournament details at the below link giving the details of the event they played in and a link to the draw webpage by 12 noon on the Tuesday immediately following the final date of the tournament.

The 2019 National Junior Ranking commenced on 1st January 2019 and the Junior Season will follow the calendar year.

Following an extensive review of transition points in national junior rankings it has been decided by the Junior Development  Committee of Tennis Ireland that transition points will not be carried over into the following year for those players changing age groups.

The Committee is making this change under the powers available to Tennis Ireland under Rule 1.3

The ranking down principle explained-

REGULATIONS FOR THE CONDUCT OF OFFICIAL TOURNAMENTS – Tennis Ireland reserves the right to modify the rules and regulations at any time.

I think I have two PINs.  What can I do?

If a player has two or more PINs in tournament software these can be merged to the primary PIN (i.e. the PIN they are using).  All ranking points on the secondary (merged) PIN will be credited to the player’s primary PIN automatically once requested.  To request this, please email npd@tennisireland.ie with the subject ’merge PINs’ including the following details in the email:

All tournament organisers must have a Tennis Ireland PIN to access adminstrative privileges.  Tournament Organisers without a PIN (an 8 digit number) can register at  ti.tournamentsoftware.com/

Step 2: Obtain your club copy of Tournament Planner from Tennis Ireland for this year

All tournaments must load their results on Tournament Software and this is done using Tournament Planner. Tennis Ireland will order a license for this product for each affiliated club.  The license can be requested by the tournament organiser by emailing cathie.hannin@tennisireland.ie including the following details in the email.

Step 4: Publish your tournament on the internet

Step 5: Check that all players have included the correct Tennis Ireland PIN with their entry

When the online entry closes on Tournament Planner if you click on the ‘Tournament’ tab and select ‘player validation’ from the dropdown list the list of players without a Member ID (pin) will appear. The player’s pins must be input to the system before the end of the tournament. Otherwise the player does not receive Ranking Points.  It is a requirement that a tournament organiser completes this process for each Tennis Ireland sanctioned tournament.

In order to ensure that the results when published can ‘count’ toward the National Junior Rankings complete the scorecard in results. All details must be input and not just ‘win/lose’.

Tournaments should have a completed Tournament Software file available for 12 noon on the Tuesday following the final day of the tournament.  This would allow rankings to be updated immediately so players can receive their ranking points by close of business Wednesday.  If a complete file is not available within this time frame, the club could be fined for each week (or part thereof) that Tennis Ireland are awaiting the completed file.