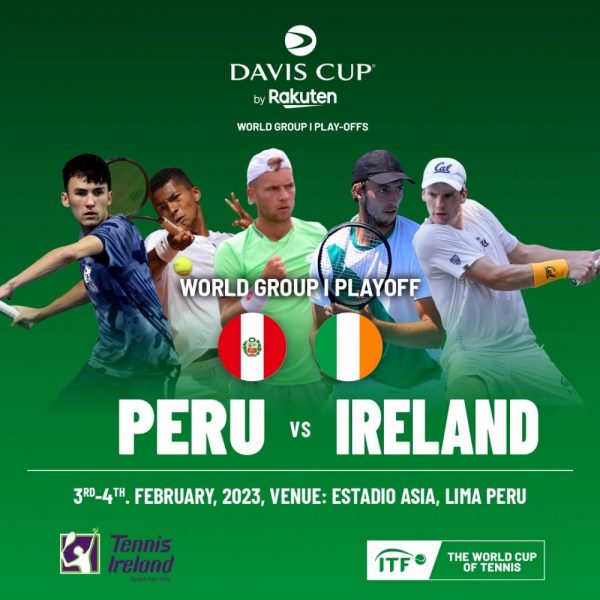 It’s an exciting time for Irish tennis as the Davis Cup team are set to face Peru in the World Group I play-off in February.

In September 2022, the Ireland Davis Cup Team succeeded in their World Group II tie against Barbados in Georgetown, winning the thrilling tie 3-2, allowing them to advance to the World Group I play offs next month. This is the highest level that Ireland has competed in the Davis Cup competition for nearly 40 years.

In the days after the tie, the draw was announced for the World Group I playoffs where Ireland drew Peru away for the tie in February.

The team selected for the upcoming tie against Peru is as follows:

Ireland will have to defeat Peru to qualify for World Group I. The tie will be played as a best of five rubbers over two days, on the clay courts in Estadio Asia, 120km outside Lima.

Tennis Ireland would like to wish a huge congratulations to all the players on their well-deserved selection and best of luck to Captain Conor Niland and the team in what is going to be an exciting tie.

Speaking of the upcoming tie, Davis Cup Captain Conor Niland said “We as a team are incredibly excited to get a chance to compete in a World Group I play-off tie for the first time in many years. We will do everything we can to get a win for Ireland.”

Garrett Barry, Tennis Ireland National Performance Coordinator said “Congratulations to Conor and his team on their nail biting win over Barbados, sending the Irish men’s tennis team on another exciting adventure to Peru at the end of the month. This is a fantastic achievement for Irish tennis and one that has not been seen for almost 40 years.”

With the current situation in Peru, Tennis Ireland is working closely with the International Tennis Federation and the Peru Federation to implement robust safety measures for the team and all involved in the tie as safety is a top priority for all stakeholders.

The tie is due to be live streamed and details will be available in the coming weeks.

Make sure to follow Tennis Ireland on social media for all the latest action in the lead up to and throughout the tie to get behind the boys in green.