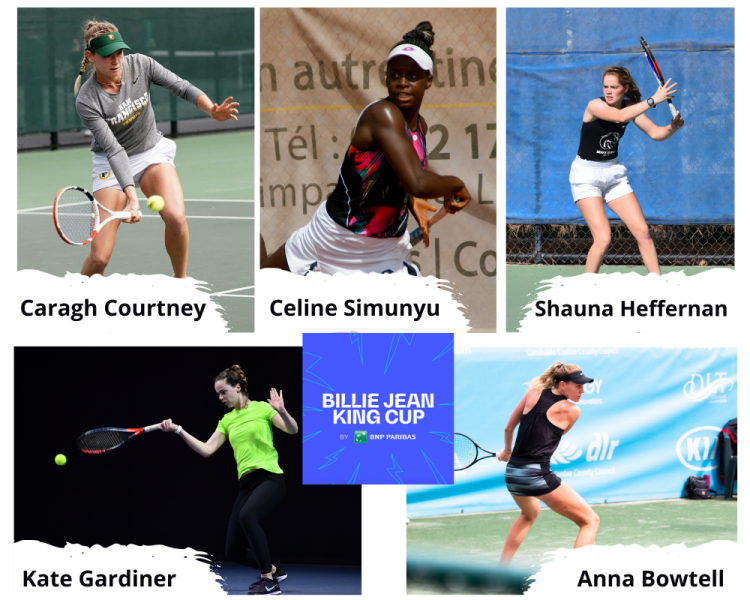 After a hard-fought campaign in 2021 where the girls in green almost clinched promotion, Tennis Ireland is delighted to announce that Ireland will return to competition in the Billie Jean King Cup in Skopje, North Macedonia from 4th – 9th July as they aim for promotion to the Europe/Africa Group II.

Only one nation will advance to the Europe Africa Group II in 2023.

The team selected for 2022 is as follows:

Ireland Captain and Leinster Performance Director John McGahon said “I am excited to go and compete at the Billie Jean King Cup in North Macedonia this July. I would like to congratulate the players that have been selected to represent Ireland at this very prestigious event. I know that these athletes have a real care and passion to play for their country. These are the moments we play for.”

Shauna Heffernan made her debut for Ireland in 2021 and hopes the team can progress from last year “I had an amazing experience on the Billie Jean King Cup team last year. We put in some great performances and had a big win against South Africa which has definitely given us huge confidence going into this year’s campaign. I’m really excited to represent my country again alongside a brilliant group of people.”

Tennis Ireland National Performance Coordinator, Garrett Barry said “Following a great team performance in 2021, falling just short of promotion, Tennis Ireland is excited about this year’s Billie Jean King Cup prospects. I would like to wish John McGahon and his team all the best for a great tournament.”

Tennis Ireland would like to congratulate the players on their selection and wish Captain John McGahon and the team the very best of luck next month.

Make sure to follow Tennis Ireland on social media for all the latest action including results each day during the event.