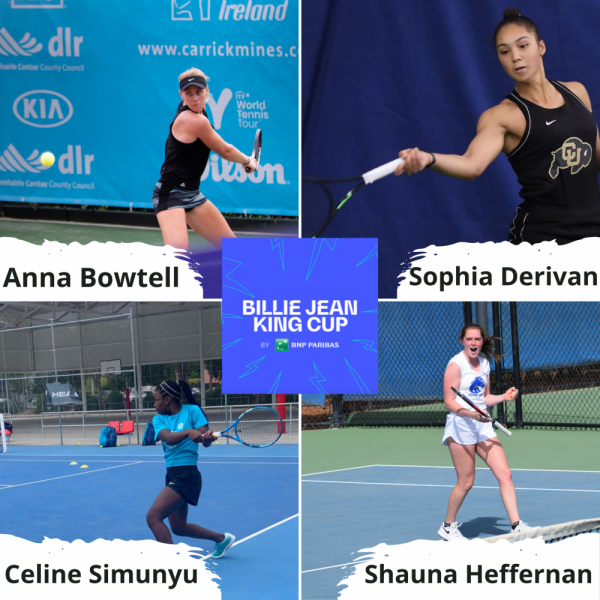 Ireland will compete in the Billie Jean King Cup (formerly known as Fed Cup) in Vilnius, Lithuania from 15th to 19th June in Europe/Africa Group III as they aim for promotion to Group II.

The official draw takes place on 14th June and teams will compete on a round robin basis in five pools of 4 teams and one pool of 3 teams with a total of 23 nations competing, including Ireland.

The team selected for 2021 is as follows:

In his second year as Captain, John McGahon said “It is a good opportunity for us to bring some new and younger players into the 2021 Irish team. 16 year old Celine Simunyu is making her debut and despite COVID-19 has been very active over the past twelve months winning junior ITF titles and moving up the world junior rankings.

Connacht’s Shauna Heffernan, is also making her debut having been very active on the American college circuit, racking up wins on the doubles college circuit at Boise State University.

Ball strikers, Anna Bowtell (Rice University) and Sophia Derivan (University of Colorado) have also competed a lot this year for their US colleges, consolidating wins throughout the season that will stand to them in our upcoming ties in Lithuania.”

Tennis Ireland National Performance Coordinator, Garrett Barry said “I would like to congratulate our 2021 Billie Jean King Cup Team on their selection. With the absence of an event in 2020, we were determined to send a team this year and through a combined effort between our captain John and his team, the staff at Tennis Ireland, our colleagues in Sport Ireland, the ITF and our ever-willing players, we have managed to safely plan for our participation in Lithuania. I would like to wish John and his team the very best of luck.”