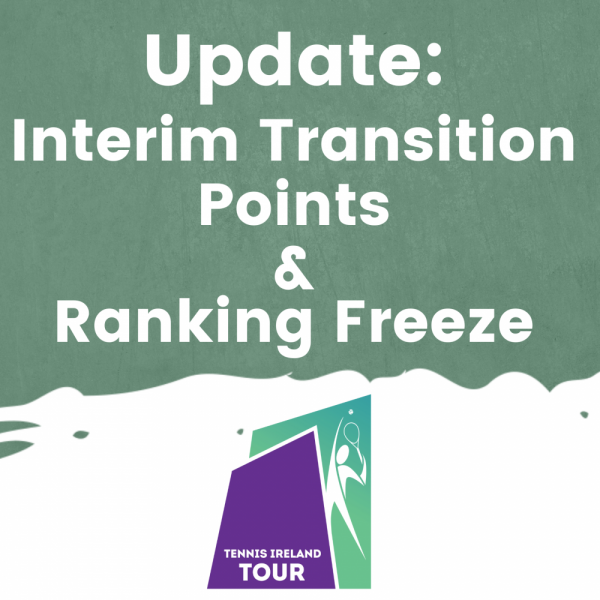 With competitions running across all four provinces it is now time to begin to remove the ranking Freeze for all Tours and the Interim Transition Points from the Junior Ranking System.

Interim Transition Points will drop as previously stated. This will occur once the criteria has been met at one of the review dates.

These Tournaments will have been completed fulfilling the criteria.

*A further 14 Tour 250 events will also have been completed

Interim Transition points will be removed in the Rankings published Week 30.

Junior and TI Tour rankings were frozen up until play was able to resume in 2021-24. All tournaments in 2020 were frozen until 2020-23. These will begin to unfreeze starting with the rankings published Week 32.

If you have any questions or spot any errors please contact competitions@tennisireland.ie.

The onset of COVID-19 and the resulting restriction applied throughout 2020 has had a significant impact on our sport, particularly in relation to the disruption of our competition programme and related rankings.

Despite the restrictions that were in place during 2020, over 25,000 matches were completed in club championships and open tournaments held nationwide. Without context this number is impressive and is something we and our clubs can be proud of given the circumstance, but it is still less than a quarter of what we would expect to be played in a ‘normal’ year.

The lack of competitive play caused by the cancellation of a significant number of Tennis Ireland Tour events has had a major impact on our ranking systems. When the initial 2020 lockdown and resulting suspension of competitions was implemented last March, we sought to protect the integrity of the system and took steps to freeze or suspend our ranking system. As we emerged from the restrictions, and competitions were permitted, we rebuilt our Tournament Calendar with the cooperation and help of member clubs, and also trialled a series of new weekend events.

As we begin 2021, both the Republic of Ireland and Northern Ireland are in an extended lockdown which has led to the cessation of competition and this means that further measures must now be taken to protect the integrity of the national ranking systems.

Firstly, a decision has been made to reintroduce a Ranking Freeze for all Tours.

Secondly, to deal with the issue of players moving between age groups it has been decided to award Interim Transition Points for the Tennis Ireland Junior Tour.  This will have the effect of minimising anomalies within the ranking system and maintaining, in so far as possible, the structure of the Junior Rankings.

The Ranking Freeze will act in a similar manner as in 2020. Ranking points from all tournaments played in 2020 including the National Indoors will be frozen until further notice

The Ranking Freeze will act in a similar manner as in 2020. Ranking points from all tournaments played in 2020 including the National Indoors will be frozen until further notice

The Ranking Freeze for the Seniors Tour will include all tournaments from 2019 and the limited number of tournaments that took place in 2020 (where the 2020 edition of a tournament was completed only this will be included in the freeze). The Freeze will be in place until further notice.

On account of the movement of players to different age groups, Interim Transition Points will only be in place for the Junior Tour Rankings. These are an additional exceptional measure needed in 2021 rather than the normal functioning of the ranking system.

At the end of every year some players move between Age Groups whilst others move from their first to second year within an Age Group.  In normal circumstances, players, would be encouraged to begin ‘Playing Up’ in their next Age Group in the latter half of their second year. However, due to the limited opportunities to compete throughout 2020 and, in particular, at the end of the year this was not possible for the majority of players due to the COVID-19 restrictions.

As a response to this, we are implementing a system of providing Interim Transition Points as follows.

They will be moving from Year 1 to Year 2 within GS16.

Dropping of Interim Transition Points during 2021

The 2021 Transition Points are Interim in nature. They have been designed to drop from the ranking system during 2021. This will happen only after providing players a chance to build on-court rankings in their new Age Group whilst also supporting those moving into Year 2 within an Age Group.

Interim Transition Points will drop on the completion of a significant portion of the 2021 Tournament Calendar as set out below.

Interim Transition Points will drop from all Player Profiles in the Rankings Published Week 2021-28 if both:

If 4 Tour 1000 and 4 Tour 500 events have not been completed by the time Rankings are published Week 2021-28 then the Interim Transition Points will drop once they have been completed at these subsequent weeks:

If these conditions have not been met by Rankings published Week 2021-32 then the Transition Points will remail active on a rolling three-week basis until the end of 2021.

The Interim Transition Points are designed to assist the competition structure and the integrity of the Junior Ranking System, while also reducing anomalies and supporting players.

All these rules are subject to amendment to take account the changing nature of the sporting situation in 2021 as a result of the COVID-19 pandemic and the resulting restrictions that are being implemented.

If you have any questions or spot any errors please contact competitions@tennisireland.ie.