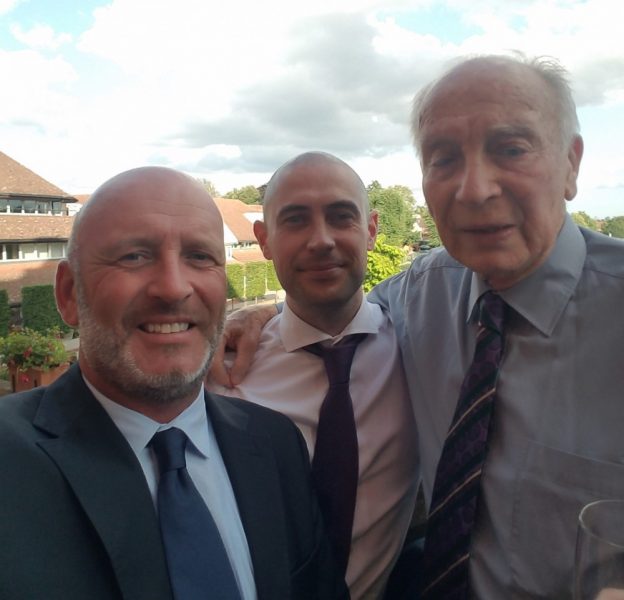 We were very lucky recently, to spend some time with Jim Murphy, father of Fergus Murphy, Ireland’s only professional tennis umpire, as he celebrated his 90th birthday in March of this year.

It was very clear how Jim Murphy could teach us all a thing or two as he still takes to the court every week for his regular doubles game, while Fergus has been keeping law and order on courts around the worlds for many years.

We had the pleasure of talking to Jim and he is full of life as he gave us an insight to his fascinating 90 years and life lessons intertwined of course, with all things tennis.

Needless to say but Jim’s story had some ups and downs along the way.  In his own words:

“My father had a tragedy on the quays outside the Liffey bar which he was running at the time. On 4th April 1938 he got a call to find a new boat. His mother came up to greet the family and he was asked to pop into the boat and up the Liffey. The engine cut out and there was a leak and he drowned, right outside the pub”.

This had a huge impact on the family and the way Jim and his siblings were brought up.  Jim moved into with his grandmother and from there his tennis journey began – both for him and for his family.

“After that tragedy… I went to my grandmother (my father’s parents) in Castledermot when I was 9. I lived and played tennis there for 10 years. We were in the 2 court club any time we got! I went and practiced with my uncle Peter (we had the long trousers and all!). His wife’s people had a private court which was grass. Growing up I played on clay, tarmac, grass and I even played in the snow. I played tennis right up all those years. Years later my wife Maureen and I lived in Chapelizod and we also played in Bushy park for years. After that I went and joined Castleknock Tennis Club and Fergus followed when he was 10 – the last of 5! Declan, Barbara, Ronan, Janice and Fergus”.

At 90 years old, Jim is still a regular player. ‘I’m still playing! I play doubles with three lads now and we have a good laugh! I always say to my partner, you’re younger and fitter than me so be prepared. Our tennis is best described as fourth division football, when there was a fourth division’. 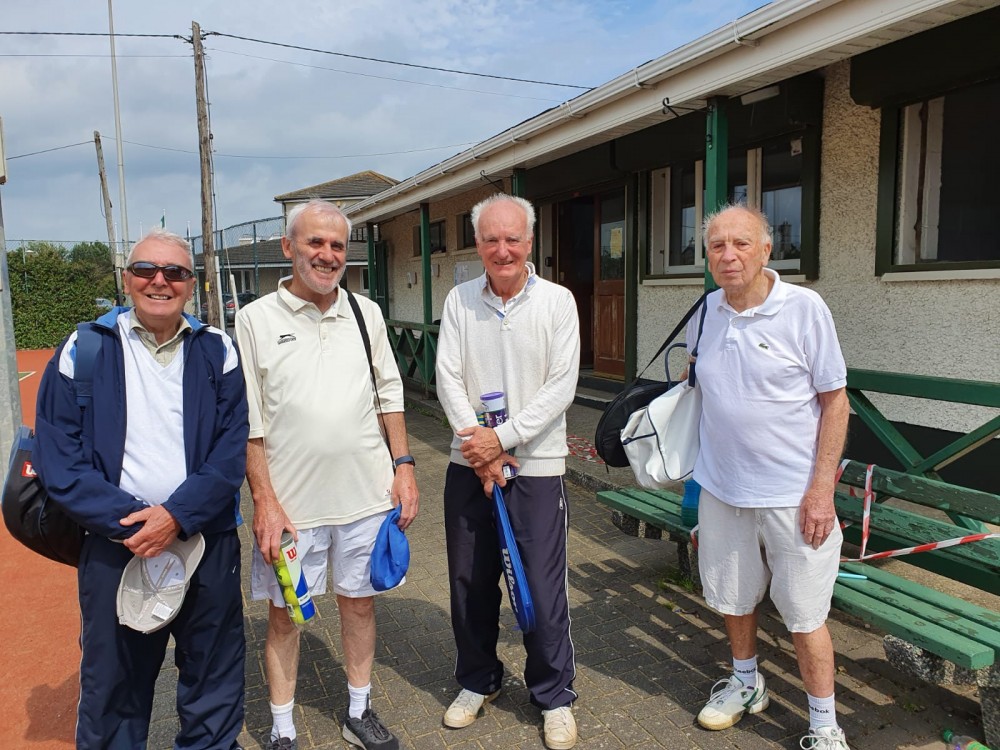 Speaking about his favourite memories of tennis, Jim said his favourite would be the Irish Open back when it was on grass. ‘We had all sorts of players and players coming from Wimbledon. Maureen and I used to work in Austins and would walk over during our lunch break to watch the matches. Over the years we’ve seen the change in the courts and the change in the rackets.’

‘In Castleknock I was a second division player and I was also the captain there. Maureen and I moved down to Bettystown after 38 years and I never indulged in anything. We were at a service in Chapelizod and a priest mentioned signing up to be a Pioneer to abstain from alcohol. I asked the Priest ‘signing it doesn’t mean anything, what does it mean?’ He put this thing on my chest and I told him the time I liked a beer was on a Saturday in Murphy’s pub, that’s the trouble I have! The Priest said that’s why we go and get over these things. So in 1962 I signed it and have never touched it since and I still have the cert somewhere!’

Reflecting on his earlier life and decisions, Jim spoke about his true passion – the entertainment business.

‘When I met Maureen I had no father, I had just done 10 years in Castledermot and I didn’t go any further than the Leaving Cert as it’s known these days. I should have gone into the entertainment business because I knew all of it yet I didn’t stay in it. I always wanted to be an actor and I went down to Abbey Theatre and there was a professional director – Jim Fitzgerald. When we were finished the final night of the plays he said ‘I’m going to form a drama group’.

I would have liked to try it and I regret not pursuing it.

I could have been this or that but I stayed in the motor business and promoted nkg spark plugs. I used to do chats for the motor trade and at one of them I was really giving it my best shot and I said afterwards I’ll be free if anyone wants to chat or ask any questions. The Fiat guys were there that day. I was back at work and one day an impressive man came in and he wanted to talk to me. It was the PR man from Fiat and he said that I gave a little trade talk the other day and asked if I would like to have lunch with Antonio Caulier. I said of course I would so off I went and there was a restaurant in Phoenix Park. I went back to work with the offer from Fiat and they said they couldn’t match this. I went to Antonio on the Monday and he says ‘here’s your staff’ and I looked at him and said ‘no this is a different job’ and Antonio replied ‘no no this is your job. You’re well able.’ The job brought great opportunities and myself and Maureen spent a lot of time with Antonio and his family. We also did various trips to Italy and America. After that myself and Maureen went into a little thing on our own before I got an offer from Toyota which was through a guy in the tennis club.’

Life can be like a rollercoaster but Jim and Maureen have been by each other’s sides through the ups and downs since 1953 after they met in a motor company called Lincoln and Nolan where they both worked for years.

Not just a talented tennis family, music has played a big part in the Murphy’s lives influenced by Maureen as her father taught in The College of Music in Dublin and she was a piano teacher herself. ‘Barbara is a pro and is in a couple of orchestras. Janice and Ronan were both in the Irish Youth Orchestra and Ronan teaches and Gaeilge and music and I’m a top class singer!! They’ve all got a great attitude to music.’

‘Fergus was studying to be a barrister and he came back and asked ‘would it be ok if I took a sabbatical year?’ he was told not to go as he had two years left. Fergus said he had an opportunity to go to the Australian Open and he didn’t want to miss it. And look at him now!’ 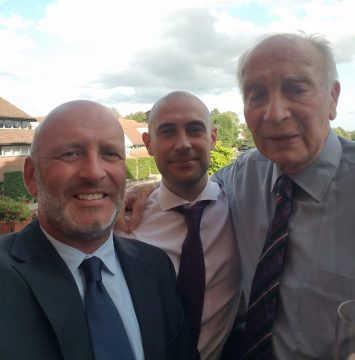 Picture: Fergus, nephew Karl and father Jim. Jim made another trip to Wimbledon last year for Fergus’ 25th consecutive year working at the event as an umpire. A ceremony was arranged to recognise the long service, followed by a great night and good memories!

This has also lead to string of fond tennis memories over the years. For example, Jim was quick to mention Wimbledon and how himself and Maureen went over for 11 consecutive years when Fergus started umpiring and when an opportunity arose to create a special memory for a fellow club member, Jim and Fergus didn’t hesitate to help.

‘Caroline in the tennis club asked could Fergus get her a ticket for her friend who was in bad health. I presented the case to Fergus and he got tickets for her and Caroline. When we got to Wimbledon there was a queue and Fergus said he was going on court soon but Caroline’s friend said she wanted to meet him. Afterwards Fergus said it was all so worthwhile. It really meant a lot to make that happen.’

When asked about his secret to longevity in tennis, Jim responded ‘I don’t wake up on Sunday morning with a sore head! Some people look at my diet and ask ‘are going to eat that?’ I’ve a strange diet. You’ve also got to play regularly, have a good attitude, proper food and proper exercise.’

An inspiration on and off the court, Jim can teach us life lessons in taking chances, surrounding yourself with good people and looking after your health to make the most of life.

We may be biased but there are so many benefits to staying involved in tennis throughout your lifetime. A sport that’s with you wherever you go and on any adventure you embark on, you can always pick up a racket or get involved in the local club no matter your age, gender or ability as tennis truly is a sport for life.

We could all do with following Jim’s philosophy toward life and tennis – when we asked what advice he would have for young people playing tennis – Jim simply suggested that just give it another year if they’re unsure and their minds may have changed by then. ‘Give a child a racket and let them play against the wall – it’s a great way to start.’  Look where Jim and his family have ended up as result?! 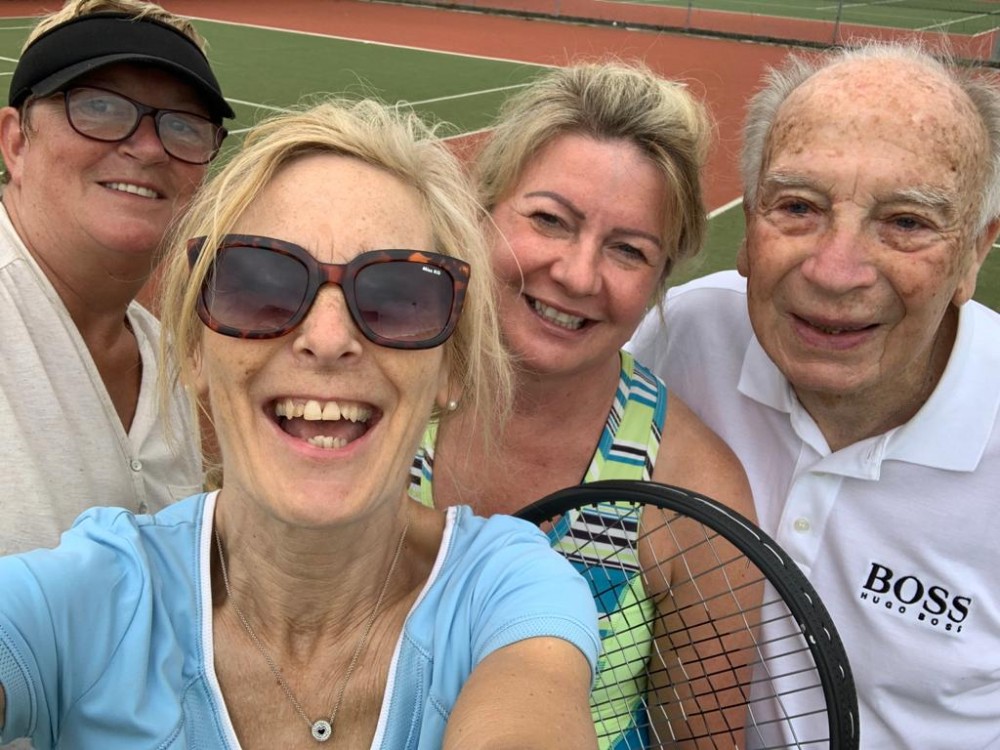