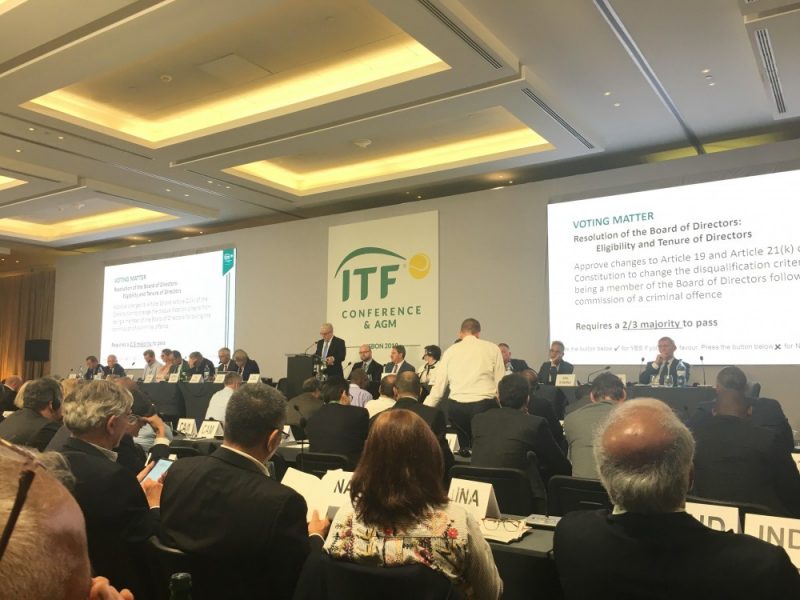 Posted at 19:12h in News by ti
David Haggerty has been re-elected as President of the International Tennis Federation on a four-year term after a convincing first round victory at the ITF AGM in Lisbon.
The American had been seeking a second term as President at the governing body’s Annual General Meeting in Lisbon, Portugal and faced the challenge of Ireland’s Dave Miley, India’s Anil Khanna and the Czech Republic’s Ivo Kaderka
However, Haggerty secured a first round victory after receiving over 60 per cent of the valid votes. A total of 215 votes were required to win the election but Haggerty received 259 votes to claim what was in the end a comfortable victory.
Khanna, who lost out to Haggerty by eight votes in 2015, finished as the runner-up again with 93 votes.
Dave Miley received 43 votes for third place, while Kaderka earned 30 votes.
“I appreciate your support,” Haggerty told the gathered nations immediately after the verdict. “I would also like to congratulate Anil, Ivo and David for their hard work in the election. Thank you very much.”
Elections were also held for the 14 positions on the ITF Board and the following candidates were elected for a four year period;
Katrina Adams (USA), Carlos Bravo (CRC), Martin Corrie (GBR), Bernard Giudicelli (FRA), Jack Graham (CAN), Nao Kawatei (JPN), Anil Khanna (IND), Ulrich Klaus (GER), Salma Mouelhi Guizani (TUN), Camilo Perez Lopez Moreira (PAR), Alexey Selivanenko (RUS), Rene Stammbach (SUI), Stefan Tzvetkov (BUL), Bulat Utemuratov (KAZ).
Unfortunately Dave Miley was not elected to the Board.
Speaking after the election Richard Fahey, Chief Executive of Tennis Ireland said, “While I wish to congratulate Dave Haggerty on his re-election, I would also like to empathise with Ireland’s Dave Miley. Dave travelled far and wide in his bid to be elected and left no stone unturned. The Tennis Ireland Board were very happy to endorse Dave, who ran a strong and committed campaign but, unfortunately, it wasn’t to be this time around.”