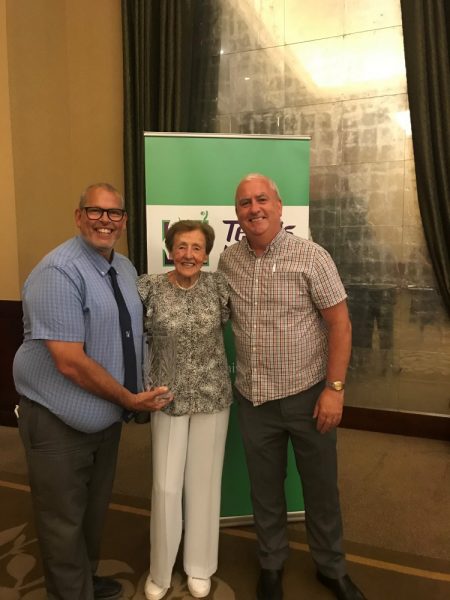 The Annual General Meeting of Tennis Ireland CLG was held at Fota Island Hotel in Cork yesterday where there was significant representation from affiliated clubs and Regional Branches.

Chief Executive, Richard Fahey provided a detailed operational review for the past year in which he highlighted the successes of the organisation at all levels with significant progress being made in the competitions, commercial and development areas in particular.

Richard also paid tribute to Garry Cahill who has recently left the role of High Performance Director to pursue other career interests after 13 years of involvement with Tennis Ireland.

The Chief Executive announced that Tennis Ireland had received a 22% increase in funding support from Sport Ireland in 2019 to support its administration and key programmes.  He also paid tribute to Minister’s Shane Ross TD and Brendan Griffin TD, and the Chairman and Chief Executive of Sport Ireland, Kieran Mulvey and John Treacy who have been very supportive of Tennis in the past year.

The delegates present were also informed of the stable financial position of the Company which had a breakeven position from a cash perspective despite significant increases in activities and expenditure.

The meeting also received a presentation from James Cooney (Competitions Manager) on the excellent progress being made in terms of increasing the quality and quantity of tournament play in Ireland plus how Tennis Ireland is working closely with the ITF and assisting them with the development of a World Wide Ratings system which will be launched in the coming months.

Richard paid tribute to Clifford Cahill whose term in office as President concluded at the AGM.  “Clifford has been a great ambassador for Tennis Ireland, visiting many clubs and representing Ireland at various tournaments at home and abroad.  It was a pleasure to work with him over the last two years”.

The meeting concluded with the presentation by Clifford Carroll of Service to Irish Tennis Awards to Ella McCarthy, Joe Power, Martin Leahy and June Ann Byrne, Ireland’s Over 85 World Champion.

Eddie Roynane, President of Munster Branch joined Clifford in presenting the award to June Ann, who gave an inspiring acceptance speech on her lifelong love of our game and some tips for players of all levels.

A fitting end to an excellent AGM.