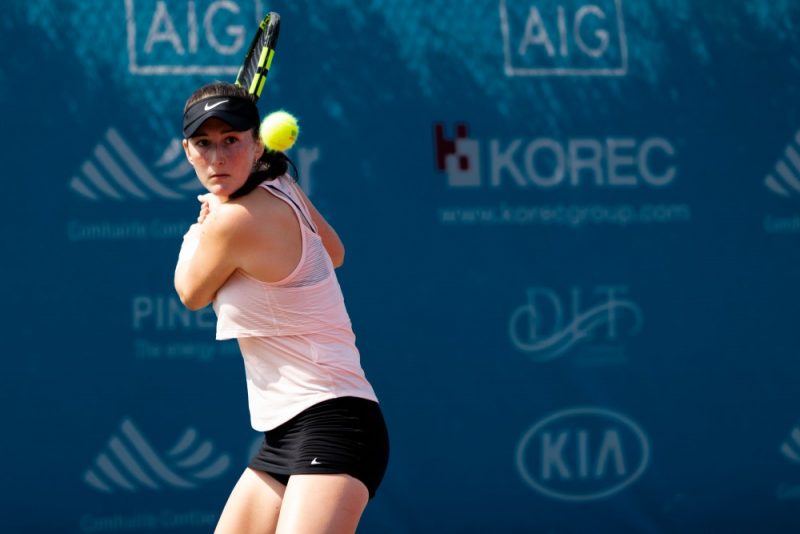 There were big crowds up for the finals of the AIG Irish Open today at Carrickmines Croquet and Lawn Tennis Club. Perfect playing conditions, a slight breeze and a bit of cloud cover giving some relief from the heat during the week.

First up was the Men’s singles final between the top two seeds Igor Sijsling (NED) and Ryan Peniston (GBR) the 2nd  seed.  Igor with a top ATP ranking of 52 and doubles finalist at the Australian Open came back from an early break to take the first set. Igor’s big serve and forehand and his accurate sliced backhand again got him out of trouble to take the 2nd set in the tiebreak (10-8) and the match 6/4 7/6.

The eagerly awaited ladies final between local Donnybrook girl Georgia Drummy and the top seed, Alice Robbe (FRA) followed. Georgia was out of the blocks very fast and with the heavier hitting off the groundstrokes and serves she dominated the match from the off. Georgia gave her opponent no time to settle and reeled off winner after winner to make it a 6/1 6/2 victory.

Congratulations Georgia on winning the AIG Irish Open and we look forward to watching you play for many years to come!

So the AIG Irish Open Tennis Championships reached its successful conclusion and what a wonderful weeks tennis it was. Well done to all the players and especially the Irish who have shown great promise and we look forward to following their progress going forward.