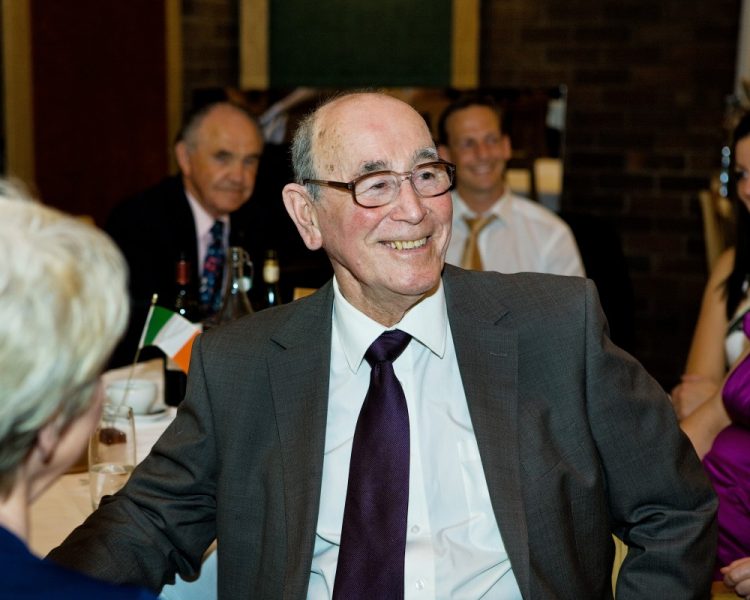 Tom O’Loughlin, former Chairman of Parks Tennis and one of Ireland’s most significant tennis promoters passed away on Monday 24th June 2019.

While born in Bansha, County Tipperary, Tom lived in Cobh until the age of twenty. From 1950 to 1970 he worked in Shannon Airport and played tennis at Shelbourne Lawn Tennis Club in Limerick. In 1970, Tom moved to Malahide and subsequently became an Honourary life member and trustee of the club.

Forty two years ago as a young man of 47 years of age, Tom’s imagination was captured by a concept called Parks Tennis, the main objective of Parks Tennis was to introduce tennis to children who wouldn’t otherwise have the opportunity to play the game.

When the concept was presented to the Dublin City Manager and his colleagues they were sold on the idea and within a short space of time the plans for building tennis courts around Dublin City were put in place. Tom eventually became Chairman of the Parks and proved to be an excellent leader and formed a good working committee generating further interest from all the other councils. As a result, courts were built all over the county of Dublin stretching from Shankhill to Balbriggan and from Tallaght to Blanchardstown.

Tom, however, wasn’t happy with the growth in Dublin alone and looked to the other counties for further growth which led to the establishment of programmes in Cork, Limerick, Waterford, Tipperary,Wexford, Galway, Mayo, Kildare, Kilkenny, Offaly, Laois, Belfast, Donegal, Monaghan.

Forty years on, Tom was still leading the Parks Organisation with the same enthusiasm as he did from the very first day he became involved. In 2018 at 88 years of age, Tom resigned as Chairman of Parks Tennis Ireland. Thanks to Tom’s generosity, time and energy, thousands of kids have been introduced to the sport over the years.

Tom will be sadly missed by all at Parks Tennis, Tennis Ireland and the Tennis Community in Ireland.

Everyone is welcome to a Mass in St.Sylvesters Church, Malahide at 10am on Wednesday 26th June.