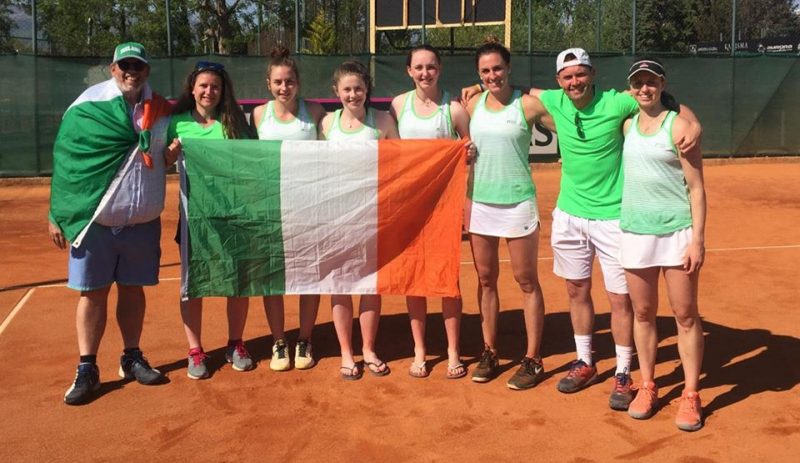 The tournament took place in Ulcinj Bellevue in Montenegro from 17th – 20th April and Ireland were drawn in Pool B along with Egypt, Morocco and Kenya.

It was a tough first day for the Irish team as they were defeated by Egypt who went on to gain promotion for Group II. Sinead Lohan fought through a tough battle to win the first singles rubber 4-6 6-2 6-1. Up next was Juliana Carton in her Fed Cup debut. Juliana put up a good fight but was defeated 6-4 6-3. It went down to a deciding doubles encounter with Egypt coming out on top.

The Irish team put the defeat behind them and showed true fighting Irish spirit in the days to follow.

Day 2 saw the Irish team face Morocco with Jane Fennelly going close in her singles rubber and Sinead Lohan coming out on top in her rubber. It went down to a deciding doubles encounter once again, but this time Sinead Lohan and Rachael Dillon got the win and Ireland claimed victory over Morocco.

Day 3 saw Ireland face Kenya with the team’s youngest players Juliana Carton and Aisling O’Connor both getting their first Fed Cup wins to give Ireland a 2-0 lead. Fennelly and Dillon won the doubles to give Ireland a convincing 3 – 0 victory.

On the final day Ireland came up against Montenegro in the 3rd/4th place play off. Sinead Lohan claimed her 3rd singles victory of the week to put Ireland 1-0 up in the tie. Juliana Carton came up short after putting up a valiant effort, meaning yet another deciding doubles rubber was to take place. Sinead Lohan and Rachael Dillon played the final rubber of this Fed Cup Campaign and claimed victory 6-4 3-6 6-3 to secure 3rd place for the Irish team.