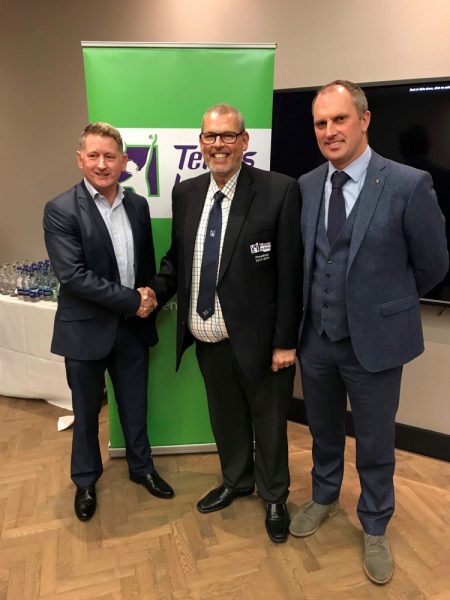 An EGM of Tennis Ireland CLG was held on Saturday 8th December at the Croke Park Hotel, Dublin for the purposes of electing a President – Elect and 3 Board Members.

Mr Shane Cooke, a former President of the Munster Branch and current member of the Board of Tennis Ireland, was elected as President – Elect of the Company in accordance with Article 26(d) of the Articles of Association of the Company.   Shane will succeed current President, Clifford Carroll, whose 2 year term will expire at the next Annual General Meeting of the company.

Shane was delighted with his election and speaking afterwards said, “I am delighted to be elected to the role of President – Elect and am looking forward to working with the Board, Branches, and staff to further the aims of the organisation.  I also look forward to supporting and recognising the work of the countless volunteers throughout the country who give their time to grow our game.

The EGM also saw the election of Mr David Mullins (Performance Portfolio Director) and Mr David O’ Beirne (Safeguarding Children Portfolio Director) in accordance with Article 26(g) of the Articles of Association of the Company. Both nominees were selected to go forward for election, by the Board appointed Nominations Committee, following a public call for candidates to fill these roles.

Mr Joe Power, having been nominated as a Representative Director by the Munster Branch, was elected in accordance with Article 26(f) of the Articles of Association of the Company

Tennis Ireland CEO, Richard Fahey, also provided an update on the activities of the organisation at the Meeting.

Speaking afterwards, Richard said, “I am delighted with Shane’s successful candidacy for President – Elect of Tennis Ireland.  This is a prestigious position within the company and Shane will prove to be a great President and I look forward to continuing to work with him in our efforts to promote, foster and safeguard the interests of the sport in Ireland.  I am also delighted that the members have seen fit to formally elect David Mullins, David O’Beirne and Joe Power to the Board.  All three have been working on the Board since their nomination earlier this year and are making a great contribution to our sport.”