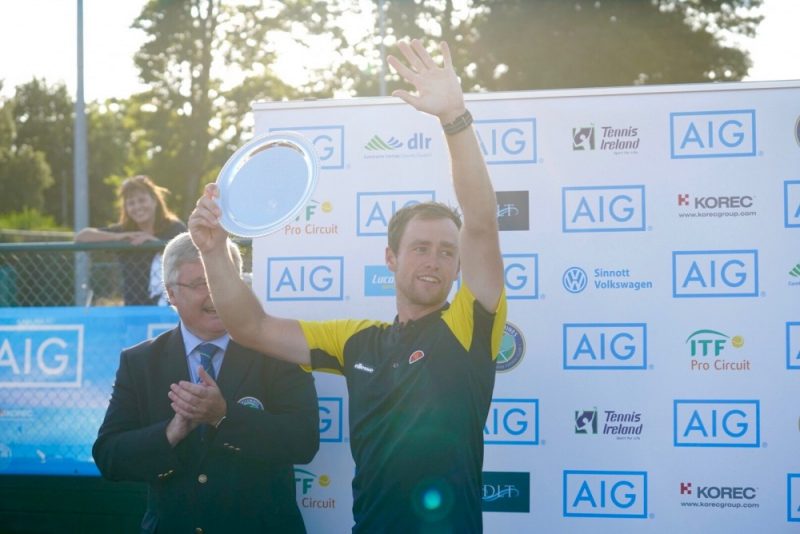 Ulster’s Peter Bothwell showed strength and determination today on court 1 at Carrickmines to defeat Britain’s Ryan Storrie and go through to win his first title, Mens Champion at the AIG Irish Open Tennis 2018.

Storrie took the first set 5-7 but Peter came into his stride in the second set, breaking serve mid-set and taking it 6-3 to level the match. The huge crowd of supporters really got behind him in the 3rd set and he pushed through to win with a very healthy scoreline 5-7 7-3 6-3

Peter played some really inspiring tennis this week in Carrickmines and we look forward to following his progress over the coming years.

Both girls displayed great power from the baseline, games going with serve until the second set when Appleton broke serve and persevered to become the 2018 AIG Irish Open Tennis Ladies Champion.

The large crowd gathered for finals day at Carrickmines Croquet and Lawn Tennis Club was treated to highly skilled performances in both matches with players showing technical ability to rival some of the top players on the international circuit.

Huge crowds turned out to cheer on the players at this year’s Championships, sponsored by AIG and for the second year running including both mens, ladies and doubles events.

The men’s event forms part of the International Tennis Federation’s Future series and the women’s competition is an International Tennis Federation Pro Circuit event. Both the men’s and women’s events have a prestigious roll of honour with previous winners including 7-time Wimbledon champion William Renshaw and Billie Jean King respectively. The tournament is also the world’s second oldest of its kind having first been played in 1879 just two years after the Wimbledon Championships began.

The level of success and the standard of play from the Irish camp at this year’s event, Julie Byrne getting to the semi-finals and a win for Peter today shows Ireland’s position on the international tennis stage with players this week showing lots of promise for the future.

Thank you to all our partners and sponsors for making the AIG Irish Open such a successful week.