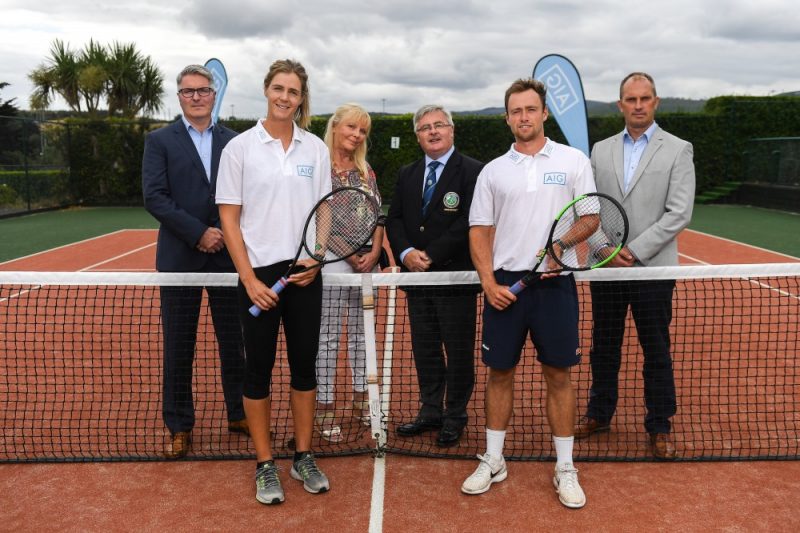 AIG Insurance today officially launched the 2018 AIG Irish Open Tennis Championships, which will be held in Carrickmines Croquet and Lawn Tennis Club, Dublin from July 29th to August 5th.  This is the second year that AIG has sponsored the Irish Open Tennis Championships which has seen the tournament revamped, both the men’s and ladies matches included and live TV coverage of the finals secured. AIG has a long association with tennis in Ireland, having a partner relationship with Tennis Ireland and previously sponsoring the Irish Davis Cup Team.

The AIG Irish Open Tennis Championships will include both singles and doubles events. The men’s event forms part of the International Tennis Federation’s Future series and the women’s competition is an International Tennis Federation Pro Circuit event. Both the men’s and women’s events have a prestigious roll of honour with previous winners including 7-time Wimbledon champion William Renshaw and Billie Jean King respectively. The tournament is also the world’s second oldest of its kind having first been played in 1879 just two years after the Wimbledon Championships began.

As well as prize money, this event gives players an opportunity to gain vital world ranking points. The finals of both the men’s and women’s singles tournaments will be broadcast live on TG4 on Sunday, August 5th.

Speaking at today’s launch General Manager of AIG in Ireland Declan O’Rourke said; “AIG is delighted to continue our commitment to the development of tennis in Ireland. We look forward to another exciting AIG Irish Open Tennis Championships this year”.

Alan Looney, Carrickmines Club President said; “Carrickmines is delighted following our recent major investments in the club to be hosting for the first time in its over 100-year history, this year’s AIG Irish Open Tennis Championships. We are looking forward to welcoming the top male and female Irish players and their supporters to our club later this summer”.

CEO of Tennis Ireland Richard Fahey added; “We are delighted to be staging this year’s tournaments in Carrickmines. It gives Irish tennis players a great opportunity to earn world ranking points on home soil. We encourage all tennis fans across Ireland to come along to Carrickmines to enjoy some top-quality tennis and support Ireland top tennis players”.

Tennis club members all over Ireland can take advantage of a range of discounted insurance products from AIG simply by logging on to www.aig.ie/tennis or by calling 1890 68 27 27.

Entrance to the tournament is free all week, keep an eye out on Tennis Ireland’s social media channels and website for scheduling and order of play.