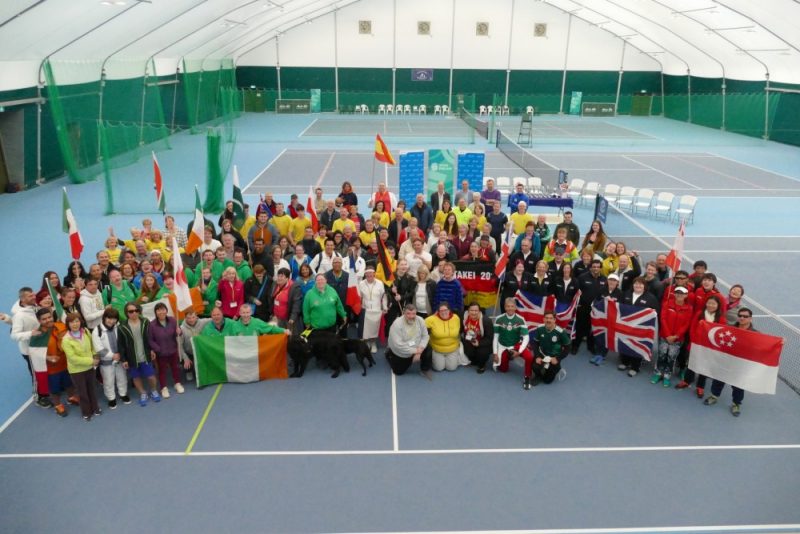 History was made last weekend at Shankill Tennis Club in Dublin when 13 countries from around the world competed in the 2018 World Blind Tennis Championships – the first time the Championships have been held in Ireland.

The tournament was rated a huge success by the players, coaches, organisers and by the International Blind Tennis Association with over 60 players taking part.

Great Britain lead the medals table followed by Mexico and, in a superb team performance, Ireland. Highlights of the Ireland team performance were Brian Lenehan from Windsor TC in Belfast who took sliver in the B2 classification and Zsophia Gruber from Shankill who was placed third in the Open category.

Tournament Director and President of Leinster Tennis, Mr Liam O’Donohoe said: ” We set out to deliver an exceptional tournament experience for our players from around the world.  The standard of competition and the support from the army of volunteers meant that we achieved all of our objectives and more.

He added: “This tournament represents a significant step forward for the sport and its dream of becoming a Paralympic sport, and one which Ireland will perform strongly in.  Our next goal is to bring the opportunity to play Blind/VI tennis to every county in Ireland.”

Gaetan Li, President of IBTA (International Blind Tennis Association) commented: “What a tournament: fierce battles on court matched by the fellowship displayed outside of the courts.  This is how strong the bond is between members of the Blind/VI Tennis family.”

German competitor Michael Wahl commented: “Dlr TAKEI in Shankill to me was a new dimension of Blind Tennis, the rallies on the court, techniques and speed and beside the court perfectly organised, great fun and international friendship.”

Niklas Hofken from Cologne, Germany, one of the leading Blind/VI Tennis, coaches observed: “It’s fascinating how fast this sport develops: techniques and tactics on court as well as the professionalism of the structures in the background. Many people worked hard in the 12 months from the first International Blind Tennis tournament in 2017 till now – and every rally at dlr TAKEI 2018 showed that it was worth it. “

Commenting on his experience silver medal winner Brian Lenehan from Belfast said: “It’s great to be World No 2 and, more importantly, we have put Irish Blind/VI tennis on the map and the next step is now to build on this success.”