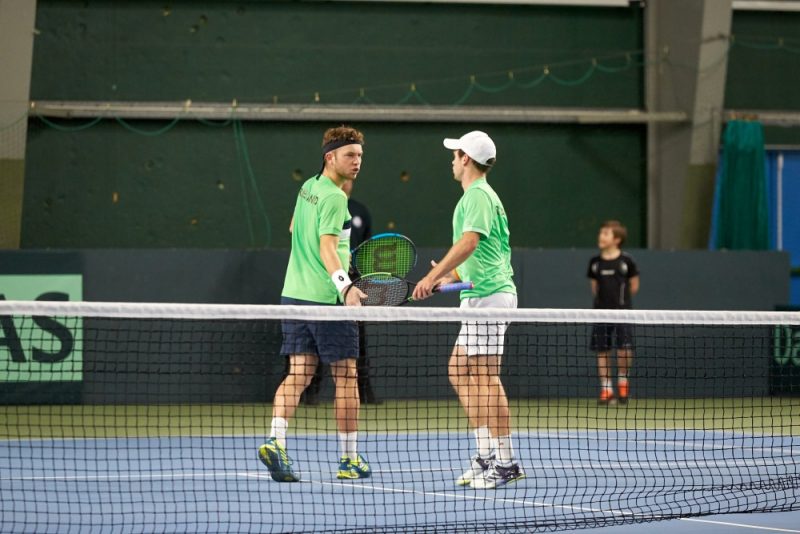 We went in to day 2 of our Davis Cup clash against Norway with all to play for after finishing up the first day 1 – 1. Peter Bothwell & Simon Carr lined out in the doubles match against Casper Ruud & Viktor Durasovic. In truth, it was a lot closer than the scoreline suggests with Bothwell & Carr playing some good tennis at times but just couldn’t get the break they were looking for. Norway proved very dominant on their serve and this was the difference between both teams on this occasion. Norway took the first set 6 – 2 after breaking Ireland’s serve early on and didn’t look back thereafter. In the second set Norwegians were in control again and dictated much of the proceedings on their serve. Bothwell & Carr battled hard throughout but eventually went down 6 – 2 6 – 2.

The pressure was now on Peter Bothwell as he faced Casper Ruud to keep us in the tie. In what was a close match Bothwell showed his fighting spirit once again and had Ruud rattled at numerous times during this encounter. Bothwell settled himself well and it was close in the first few games of the set but Ruud upped his tempo to break Bothwell to go 4 – 2 ahead. Ruud powered through the remainder of the set to take it 6 – 3. The start of the second set was similar to the first with both players performing well on their serves and not giving much away. Ruud was first to break Bothwell’s serve and took a 4 – 3 lead. Bothwell to his credit never lay down and battled back to break Ruud in the following game. Both players held their next service games to bring it to 5 – 5 and on Bothwell’s service Ruud showed his class and was able to change gears and break Bothwell once again which would allow him to serve for the tie. He duly obliged and took the rubber 6 – 3 7 – 5. He didn’t have it all his own way and Bothwell can certainly be proud of his performance today and throughout the weekend.

Hard luck to this young Irish team who battled hard in both Denmark & Norway and will now pick themselves up to represent Ireland in Group III next year. The draw for Group III will take place in September and the format will consist of a group stage and play – off as we will seek to gain promotion back to Group II next year.