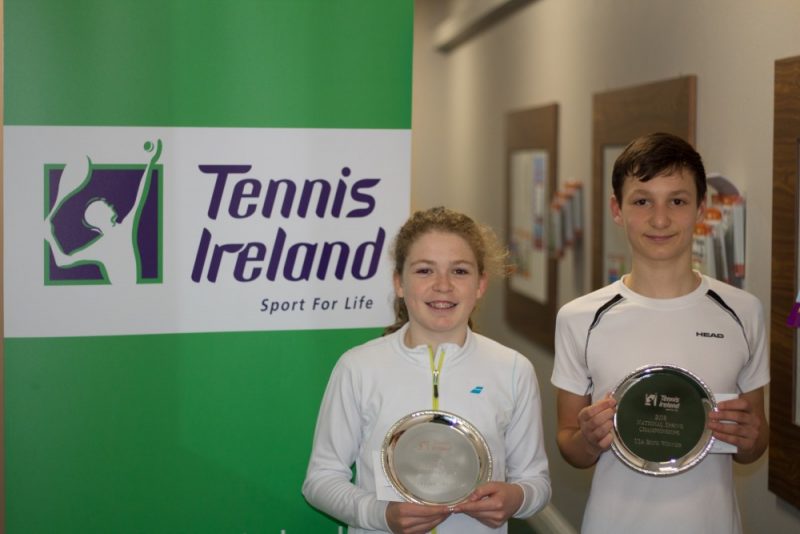 Congratulations to our Under 12 and Under 14 Champions and to all who competed in the National Spring Championships during mid-term.  Play started on Thursday Feb 15th with a draw if 32, the second round and quarterfinals were played on Friday and semi-finals and finals were played on Saturday so it was 3 intensive days of matchplay for our finalists.

In the Under 12 Boys Johnny Wilkinson the no 1 seed from Carrickmines played David McCarthy from Ratoath. McCarthy had played some great tennis earlier in the day overcome Scott Barron in the semi-finals but it was Wilkinson who managed to carve out the more consistent performance in the final winning 6/1 6/2.

In the U12 Girls final Realtin Stara from Galway faced Kate Brennan from Limerick both members of the National Tennis Academy. Both girls started well but it was Stara who proved the more determined of the two winning it in straight sets 6/3 6/0

In the Under 14 Boys Reem Gafurov and Peter Barun emerged from a highly contested draw to reach the finals and it was Barun who had eliminated the no 2 seed Johnny McCracken in the quarter-finals, who went on to claim this one in a match tie-break 5/7 6/3 12/10

The Under 16s and Under 18s events took place from Friday 9th – Monday 12th February in Westwood Clontarf with some of the top ranked juniors  in Ireland taking part.

In the Under 18 Boys the unseeded Cathal Butler battled against the favourites with both Harry Ellesmere (8) and Cian McDonnell (3) toppled enroute to the final. Butler eventually overcame the no 1 seed and defending champion Jordan McKeown to take the title.

In the Under 18 Girls Shauna Heffernan certainly put her injury woes of 2017 behind her as she defeated Zara Ryan from Naas.

In the Under 16s Girls the top 2 seeds Olwyn Ryan-Bovey (1) and Sarah O’Connor (2), both semi-finalists in the Shared Access National Indoors, reached the final with Ryan-Bovey taking the spoils on this occasion.

The Boys event was less predictable with the no 1 seed Andrew Gaule exiting the tournament in the second round at the hands of 14 year old Hugh Butler who subsequently lost to the no 6 seed Dylan Leeman in a match tie-break. Indeed all four quarter-finals were highly competitive matches with the eventual winner Mark Borisov from Castleknock proving he had the stamina and competitive edge to finally take this one.

Results were as follows

The Under 12s and Under 14s will get underway this Thursday with finals scheduled for Saturday afternoon.

Check here for draws and updates