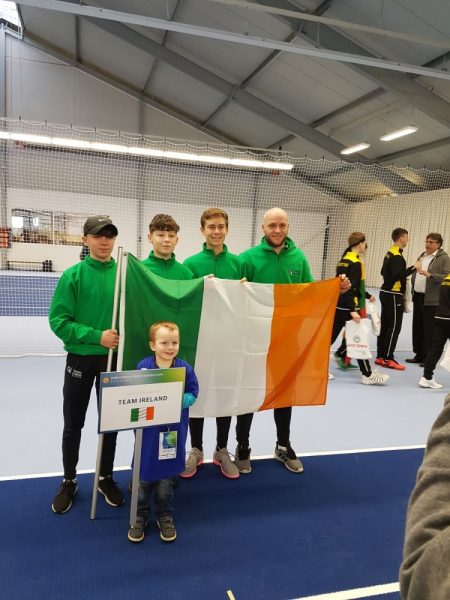 Tennis Europe U14 Winter Cup took place in Cologne Germany from 1st – 4th February. The Irish team of 3 boys included Arthur O’Sullivan, Zach Murphy, Hugh Butler & captained by Ed Seator. The team were drawn to play Lithuania in a preliminary qualifier on day 1 and produced some great tennis to win the tie 2 – 1 and progress to the main event.  They faced Great Britain in the opening round and won their doubles 7 – 5 6 – 3  but the GB team proved too strong overall winning the tie 2 – 1. In the consolation ties against Bulgaria & Netherlands they suffered defeats in both ties 2 – 1. They faced top European ranked players from both of these nations gaining invaluable experience competing on such a big stage.

The U16 girl’s team travelled to Lousada, Portugal to compete in their event from 2nd – 4th February. Juliana Carton, Gigi Lynn Browne and Olwyn Ryan Bovey captained by Cian Blake made up the Irish team who were drawn in a tough group with some top European Nations including the no 1 seeds Ukraine who got the better of the Irish girls in the opening round. The team came up against Slovenia & Great Britain in the consolation ties, but there was no luck for them on this occasion losing both ties  3 – 0. This was a tough experience for the team who will regroup and draw on it to build for the year ahead.