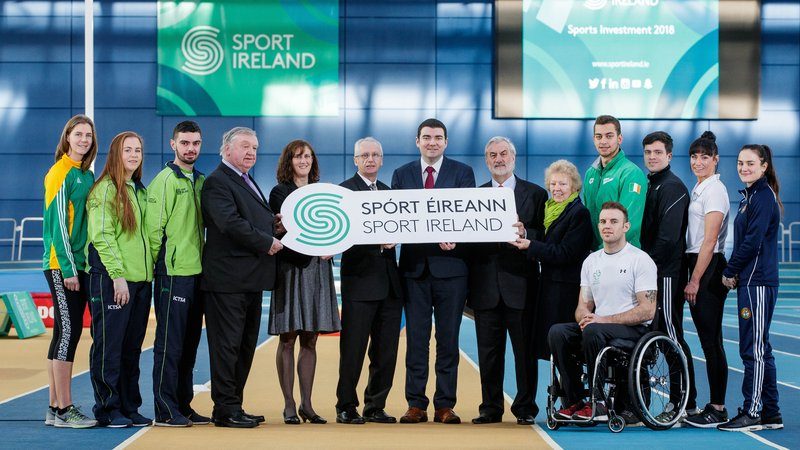 Sport Ireland has announced its investment package for National Governing Bodies for Sport and High Performance Programmes in 2018. The announcement was made by Minister of State for Tourism and Sport, Brendan Griffin TD, at the Sport Ireland National Indoor Arena on Thursday.

Speaking at the announcement, the Minister said: “I am pleased to announce the 2018 funding for National Governing Bodies of sport through Sport Ireland Core Grant Funding, the Sport Ireland Women in Sport programme 2018, and our High Performance programmes 2018. The valuable work of our national governing bodies in providing opportunities for people of all ages, backgrounds and abilities to get involved in sport cannot be underestimated. The funding announced today will support this vital work, as well as furthering Ireland’s ambitions at the highest level on the international stage. 2017 was a fantastic year for Irish teams and athletes and we look forward to that success continuing into 2018 with this funding enhancing our programmes and assisting our athletes to reach their potential.”

In total funding of €20.7m was announced which includes €10.8m to be invested in the core activity of National Governing Bodies for Sport (NGBs), €600k to Women in Sport programmes delivered by NGBs, €7m in NGB High Performance programmes.
The Minister also announced €380k in targeted funding for High Performance projects which was allocated to five NGBs at the end of 2017 to assist with the preparation for key events in 2018.

The  primary purpose of the Performance grant is to support governing bodies in the delivery of their high performance programmes while the Women in sport grant aims to raise the overall physical activity levels amongst women and support women’s roles within sporting organisations.