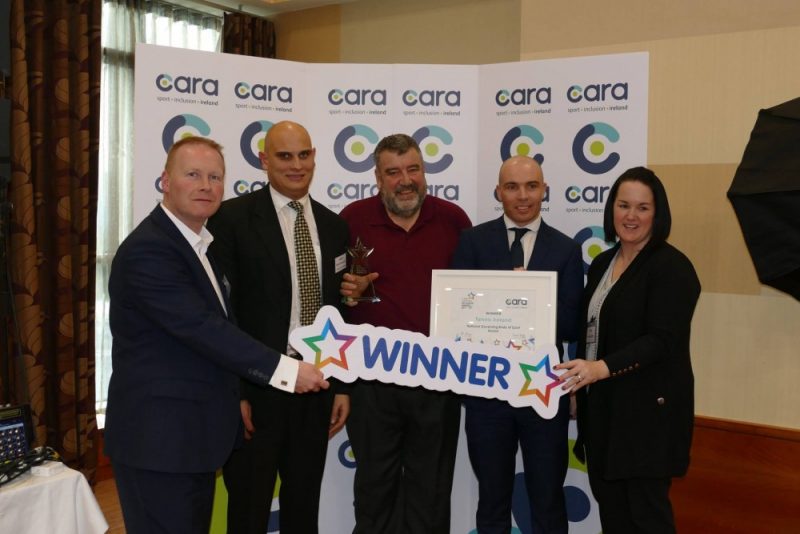 Tennis Ireland was delighted to have been recognised as Ireland’s best National Governing Body at the 2017 CARA National Inclusion Awards yesterday.

The CARA National Inclusion Awards recognise and acknowledge organisations and individuals in Ireland who contribute to enhancing participation opportunities for people with disabilities in Sport, Physical Activity and Physical Education and Tennis Ireland received the award for Best National Governing Body for its Enjoy Tennis Programme yesterday

The programme, which began in 2015, now has over 800 players playing in 65 clubs nationwide.

There are five streams to the programme involving players with an intellectual disability, Profound autism, Vision Impairment, Acquired Brain Injuries including strokes and Wheelchair users.

The award was proudly accepted by Liam O’Donohoe, the driving force and co-ordinator of the programme since its inception.  Speaking afterwards, Liam said, “I’m delighted to be in a position to accept this award on behalf of Tennis Ireland.  It is recognition of the great work that is delivered by our Development Officers, Coaches, Clubs and the participants.  We finished runner up in this category last year to the FAI so it’s fantastic to go one better this year”.

Tennis Ireland CEO. Richard Fahey said, “Tennis is truly a sport for all and it’s great that the work carried out by Liam, his team and the tennis community is being recognised in this way.  The board and I are working closely with Liam and Sport Ireland to plan for the expansion of this programme and hopefully we can also get the support of the Irish business community to achieve this.

Liam was also nominated in the category of Volunteer of the Year at the awards for his work leading the Enjoy Tennis programme and was a very worthy Runner-Up.