Osgar O’Hoisin beat David Mullins in the Men’s Final of the 2018 Shared Access National Indoor Championships at David Lloyd Riverview today.
Top seed and 2016 Champion O’Hoisin had too much power for the second seed Mullins winning 6-7(5), 6-1, 6-1
The Final was a fascinating battle of youth versus experience. O’Hoisin, aged 21 and just selected for his Davis Cup debut in Ireland’s next tie against Denmark up against Mullins, aged 38, who made his Davis Cup debut 19 years ago in 1999 and played for Ireland from 99-2004 under Peter Wright and Owen Casey.
The match was an intriguing contrast of styles with O’Hoisin’s big serve and forehand up against Mullin’s all court game which he varied to great effect.
Mullins won the first set on a tie break in a set which saw no breaks of serve.Mullins played a classic tie break making no mistakes winning the breaker 7-5.
O’Hoisin finally broke serve in the opening game of the second set after a long deuce game before breaking twice more to finally claim the set when Mullins double faulted at 1 – 5 to bring the match into a final set.
The decisive first break of serve of the deciding set came in the 4th game when Mullins hit a backhand out after a powerful O’Hoisin forehand. O’Hoisin held serve and then broke again when Mullins hit a forehand volley out before finally holding serve to win the deciding set 6-1.
O’Hoisin also won this tournament in 2016 beating Simon Carr and is currently on a scholarship in Wisconsin in the U.S.A. His opponent today knows all about college tennis in the states having spent almost 20 years in college tennis in California, Chicago before finishing up doing 6 years in Oklahoma where he worked as a Division One College Coach. Indeed Mullins is currently sports Manager at Fitzwilliam LTC where he is based since returning from USA in July 2016.
Next up for the Irish Men’s game is the Group II Davis Cup clash away to Denmark in February. Ireland’s Davis Cup captain Conor Niland has named Pete Bothwell, Simon Carr, Osgar O’Hoisin, Julian Bradley and Sam Bothwell in his squad. Of the group, all but Pete Bothwell are tournament debutants.
Top seed Karola Bejenaru won the 2018 Shared Access National Women’s Final beating second seed Ruth Copas 6 4 6 1. The first set was the decisive set in the Ladies’ final. Bejenaru broke serve at 3 all and crucially saved break points in her next service game before winning the set 6-4. She was much too consistent for Copas in the second set racing away into a 5 – 0 lead before double faulting at match point before Copas broke serve. Bejenaru proceeded to break Copas in the next game to take the set 6 – 1.
The 20 year old gained revenge for her heartbreaking Final set tie-break defeat to Copas in last year’s Final. She dominated Copas with her powerful groundstrokes with her backhand down the line causing particular damage.
Bejenaru, although born in Romania, has been living in Ireland most of her life and is currently seeking Irish Citizenship with her application in progress. Based on her performances this week, she would be a huge addition to the Irish Federation Cup. She is based at the National Tennis Academy in DCU where she is a full time pro player with current ranking of 1004 and a career high of 746 in 2016. She did not drop a set throughout the entire tournament.
Although Copas will be disappointed at failing to retain her title, she will be pleased with how her game is developing. She has an excellent defensive game and is mentally very strong.
Copas, who is 21, is currently on a full-time scholarship at the University of New Mexico. She made her debut for the Irish Federation Cup Team last year.
She was a member of Dundalk tennis academy as a junior before moving to America under the direction of her coach and former Davis Cup player, John McGahon. Indeed, Marie-Perla Biansumba who lost in the semi-final to Bejenaru also plays out of Dundalk Tennis Club.
Next up for the Irish Federation Cup squad is the Euro / Africa Zone Group 111 Round Robin in Montenegro in April. 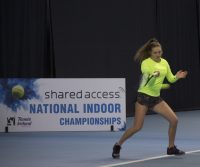 Tennis Ireland is delighted to announce Shared Access as the title sponsor for the 2018 National Junior and Senior Indoor Championships for 2018 and 2019.

The National Indoor Championships are one of Tennis Ireland’s most prestigious tournaments.  Dating back to 1987 the tournament has been held in a number of venues most recently the Westwood Sports Clubs in Clontarf and Leopardstown.

Shared Access manages communications infrastructure for wireless operators at major Irish developments such as Dundrum Shopping Centre, Dublin Port Tunnel and sports stadia such as Thomond Park, Musgrave Park as well as at a more local level.  They have history of working with Tennis Ireland and have entered into commercial agreements with a number of Tennis Clubs who have leased small sections of their land for the development of telecommunications infrastructure in return for market leading rates.

Speaking about the sponsorship, Tennis Ireland’s CEO. Richard Fahey said “We are delighted to have Shared Access partner with us for these tournaments which are one of the highlights of our competition calendar”.  We are also delighted to have the Senior event back in David Lloyd, Riverview for the first time in a number of years”.

Chris Jackman, CEO of Shared Access, said “I’m delighted to be associated with this event and with Tennis Ireland.  We’ve entered into a number of partnerships with Tennis Clubs in the last year and look forward to partnering with further clubs as we roll out key national telecommunications infrastructure with the various operators”.