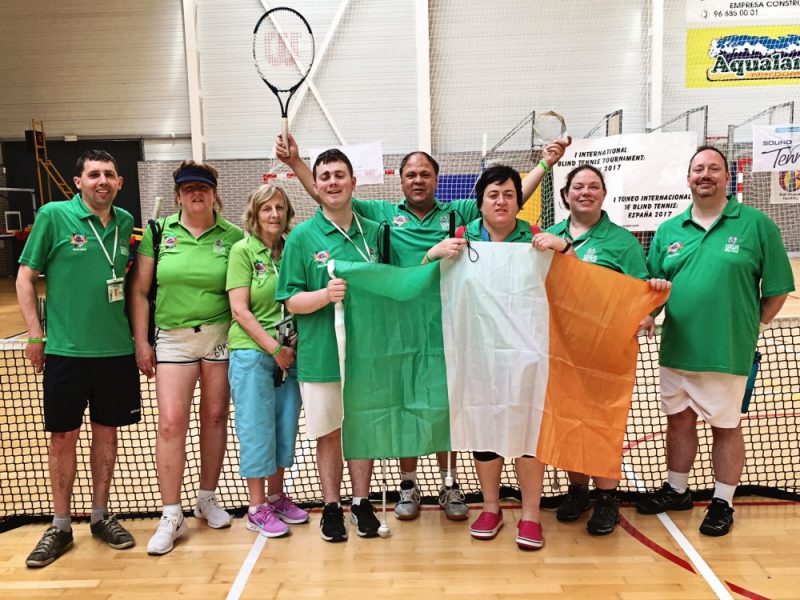 The eight Blind/Vision Impaired tennis players have just returned from Alicante, Spain following last week´s first International Blind Tennis Association’s Championship. They arrived home with results they never dared to hope for: Willem Roode came 3rd in the B3 Class where he narrowly lost the semi-final to the eventual winner Chris Bailey from Great Britain. Roode went on to win the 3rd place play off against Australian opponent Adam Fayed. In addition Roode received widespread recognition for agreeing to play a match with Singaporean Ng Jesson against whom he had previously been granted a walkover. Roode, who had qualified for the semi-final, put this at risk by doing so. However, he won the match in a closely fought contest.

“What a week – what a tournament, what an experience. To come 3rd in the men’s B3 category was way beyond what I thought was possible. I know now that I can compete at this international level. I look forward to the next opportunity! A big thank you to our coaching team and the volunteer guides who came to the tournament this week” Willem said following the tournament.

“Willem is amazing to watch,” said Clodagh O´Donovan, a sighted guide from the Irish Team, “His matches gathered so many spectators from all the other teams because his style and speed is phenomenal.”

Added to this achievement, David Nason and Roisin Dermody succeeded in reaching the quarter-finals in the main draw, while Oran O’Neill won and lost some epic and tense battles in his B1 campaign – including playing against, and taking some games from, the overall tournament winner and world no 1! Also, Johnny McInerney from Thurles, the team´s youngest player, reached the final of the B2 consolation tournament.

Roisin Dermody was christened “Diver Dermody” amongst the players in the tournament.  She heard her opponents ball  bouncing to her left,   flung herself towards the ball, landing and sliding across the court! – somehow her racket connected with the ball which popped back over the net to the bemusement of her opponent and the astonishment of the spectators.  Dermody simply commented – “I owe it all to Boris!”

David Nason commented: “Winning my first official international competitive match was an incredible feeling, but the matches I lost, and the ones I watched, blew me away too. I want to be that good and can’t wait to get back training.

“What a simply great week! Performances on the courts, learning from playing at the highest level of Blind Tennis and a whole range of new contacts and relationships that have been built over the week.” said Liam O’Donohoe of Tennis Ireland. “We knew we would have an opportunity to learn from playing against tough opposition. In fact it went so much further than that as a number of players were able to bring new shots and techniques into their game for the later rounds of the tournament. These ranged from some completely new strokes which Óran O’Neill and Tina Lowe were able to bring into their B1 matches, to new techniques to use to locate themselves on the court.”

Sarah O´Donohoe, the team´s coach said: “What an amazing week for Blind tennis. We are incredibly proud of the team’s performance in Spain. They have worked extremely hard and acquitted themselves admirably in their first international tournament. We are all looking forward to getting back out on court and putting the invaluable experience gained into action. Roll on National championships!”

The results from the international tournament will determine the sport´s first world rankings, which have not been released yet, but we already know that Ireland has the world´s number 3 ranked Men´s B3 player in Willem Roode, and two of our B2 players are in the top 8 in the world.

Following this week´s tournament, international friendlies have been agreed with Britain, Germany and Poland, and other countries are also interested in developing a relationship with Ireland´s blind tennis players in the future. These plans will keep the Irish team busy till at least May 2018.

Overall, a great week in the development of Irish tennis! 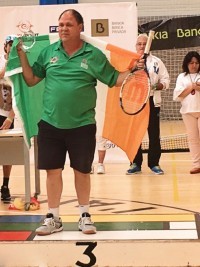 Willem Roode in 3rd place on the podium