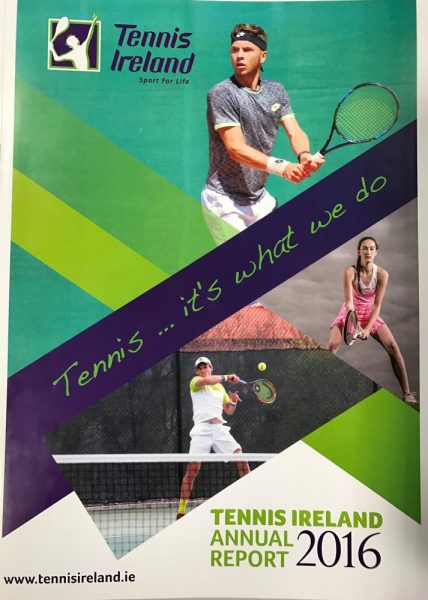 The Annual General Meeting of Tennis Ireland was held on Saturday 6th May in The Crowne Plaza Hotel in Santry where there was significant representation from affiliated clubs and Regional Branches.

CEO Richard Fahey provided a detailed operational review for the past year in which he highlighted the success of the Irish Davis Cup team being promoted after a promotional play-off against Bulgaria last month.

Davis Cup Captain and former ATP Tour Professional, Conor Niland also presented to the meeting on the successful campaign and his hopes for a home tie in 2018 when the draw is announced later this year.

The Chief Executive paid tribute to all of the clubs and volunteers within the sport who helped to facilitate 142 open tournaments catering for 10,095 players over the past year and the 20,185 children participating in Parks Tennis programmes and looked forward to further developing relationships with them to grow the game.

The delegates present were also informed of the strong financial position of the Company which had an operating surplus of €133,000 and has increased its reserves during 2016.

The meeting heard how the next generation of players is being catered for in regional and national academies and the CEO outlined an increased investment in this area to €766,000 in the last year and a commitment to further invest in the coming years in an effort to support players such as Simon Carr, who will play in the upcoming French Open.

Finally he paid tribute to George Stevenson who stepped down as President at the AGM. “George has not only been a great ambassador for Tennis Ireland but he has also worked tirelessly for many years to grow the sport”.

Clifford Carroll from the Munster Branch was elected as President for a two year term.