Ben Neal is named Children’s Coach of the Year 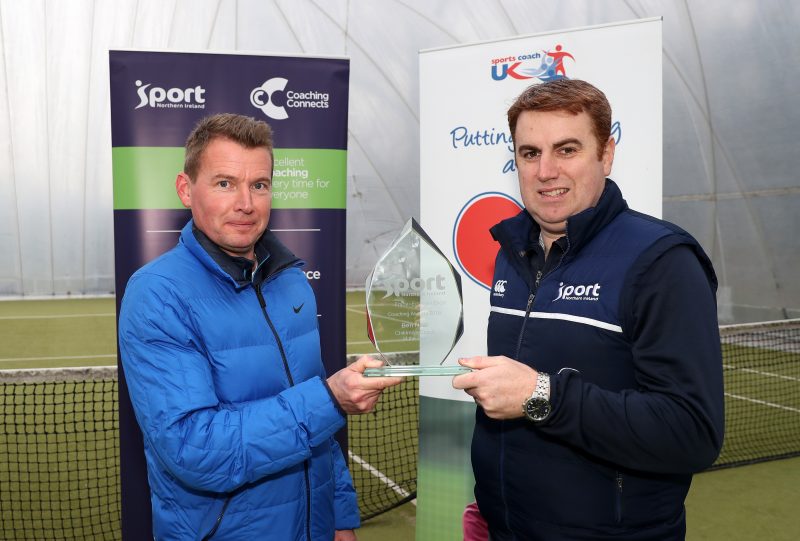 Congratulations have been paid to Ulster Tennis Academy (UTA) Coach, Ben Neal, who has been named Children’s Coach of the Year at the 2016 Sport Northern Ireland Coaching Awards. Ben is the first tennis coach to win the award, and was nominated by Ulster Branch Tennis Ireland.

The Children’s Coach of the Year award recognises the outstanding contribution of a Children’s Coach to the development of the skills, understanding, enjoyment and lifestyle through sport of young people aged under 16, as well as demonstrating innovative practice.

Ben was nominated alongside fellow Ulster Tennis Academy colleagues UTA Head of Operations, Stuart McQuitty (nominated for Talent Coach of the Year category) and UTA Coach Lynsey McCullough (nominated for Young Coach of the Year category). All nominees are featured in a Sport NI Coaching Awards video which can be viewed here: https://www.youtube.com/watch?feature=youtu.be&v=ss5AmTxOleQ&app=desktop

“Ben has made an extremely positive impact over the past 12 months by reaching out to, and providing opportunities for, new and talented young tennis players through his work at the Belfast Boat Club and as Under 10 Lead coach within the Ulster Tennis Academy squads. Sport NI knows the vital role coaches play in helping communities enjoy, engage and excel in sport, and the Sport NI Coaching awards are about celebrating the outstanding coaching talent and spirit that exists in Northern Ireland. Ben is a wonderful example of this, and on behalf of Sport NI, I congratulate him on his award, and wish him continued coaching success in the future.”

“Thank you to Ulster Tennis for the nomination and to Sport NI for the award. I am very proud to receive this award considering the high level of the nominees. We have a great team both in Ulster Tennis and at the Belfast Boat Club and I am looking forward to developing things further.”

Ben is a Tennis Ireland Level 3 coach with 15 years of experience in coaching in the Ulster Squads/Ulster Tennis Academy, with two years as a Lead Coach.  In Ben’s role as UTA Under 10 Lead Coach he has helped develop the Tennis 10’s programme in which the number of players taking part in Tennis 10’s events (Red/Orange/Green) have increased by 80% from 140 in 2013 to 250 in the 40 events held in the Province throughout 2015/16.   The Tennis 10’s events give UTA Under 10 squad players the opportunity to put the skills that they have learnt in training into practice and gives new players the opportunity to try the sport and to be talent spotted for the UTA squads. Ben has also used his knowledge and experience to introduce doubles play into the Tennis 10 events to give young players the chance to develop these indispensable skills.

Following his win, Ben has gone forward as a nominee to the UK Coaching Awards.

“On behalf of Tennis Ireland and UBTI, I would like to acknowledge Ben for his coaching expertise and for his ongoing hard work and commitment to tennis both in the Ulster Tennis Academy squads and at Belfast Boat Club which has resulted in the achievement of this award.  We wish Ben every success as he continues his coaching development.”