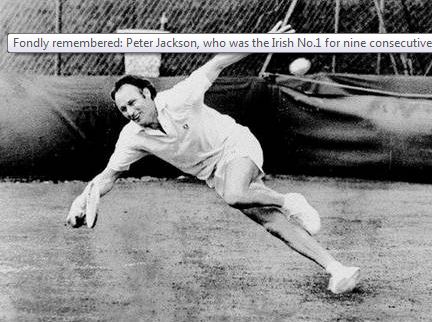 Peter Jackson who has passed away aged 80

Peter Jackson, Ulster’s stand out tennis player of the 1950s and ’60s, has died aged 80.
A former Ulster and Ireland No.1, he initially played for the Cavehill club but also joined Windsor at a time when they made up a large part of the Irish Davis Cup team with players like Vivian Gotto, Tommy Crooks and Derek Arthurs.

From north Belfast and a former pupil of Belfast Royal Academy, Peter played at a high level during the amateur era of tennis, working initially in the linen trade before becoming a Dunlop sports equipment representative, later opening his own sports shop.
He also played junior rugby for Ulster.

In a career which spanned over 20 years, he won numerous tournaments throughout Ulster and Ireland including the Ulster hardcourt championships as well as the Co Antrim, Co Armagh and North Down tournaments.

For nine successive years he was Irish No.1 and was also one of the few Ulster players to have played at Wimbledon and in the US Open.

But it was in the Davis Cup where he excelled, playing for Ireland in a then record 19 matches, often alongside his fiery fellow Ulsterman Arthurs, who later emigrated to Australia and passed away in 2008.

For all his victories, however, it was a defeat he remembered most of all, a match in which he lost a marathon five-setter to Yugoslavia’s Zeljko Franulovic, who was ranked in the world’s top 10 at the time.

He also had a memorable battle in the Ulster grasscourt championships at the Boat Club with rising Dutch star Tom Okker who went on to become the World No.3.

However, his career ended in acrimony when he was ordered to play in a trial match for his Davis Cup place in 1973.

He was injured at the time and asked for dispensation which was refused. He decided to retire and never played competitive tennis again.

Although Peter had little contact with Ulster tennis in recent years, just two weeks ago he attended the 100th anniversary of the Fitzwilliam Irish junior open, a tournament in which he reached the final in the early 1950s.

Peter, whose wife Margery died a number of years ago, is survived by his two sons Andrew and Peter jnr.